Biopolitics, Dual Power, and the Revolutionary Characteristics of “Serve the People” Programs

Prominent revolutionary movements typically follow the strategy of delivering immediate and concrete benefits to the masses, while simultaneously developing institutions parallel and opposed to those of capitalism.

When studying the history of revolutionary struggle, one thing should stand out: the fact that most (if not all) noteworthy revolutionary movements were centered and propelled by a strategy that delivered immediate, tangible, and concrete benefits.  That is to say, their strategies directly engaged with the material base of society and grappled with problems of economics.  They created clear and present value for those who participated in or related to these movements, and expanded access to basic goods like food, or basic services like health care.

Unlike simple charity programs, these revolutionary programs functioned as ways for people to seize control of their own lives and their own destinies, rather than being dependent on private charity or state-controlled welfare programs.  We can see this being the case in the late ‘60s and early ‘70s, when the Black Panther Party established “Serve the People” programs across the United States.  We can also see right-wing/conservative analogues of this in the form of Hezbollah, and the power they draw from being in control of basic goods and services in the slums of Lebanon.

The development of programs that bring benefits to the people, by the people, also serves as a way to begin building larger systems of governing political, economic, and social life autonomous from and opposed to state and capital—institutions of the proletariat.  As such, programs centered around controlling or delivering material resources forces radicals and revolutionaries to delve into questions of how to actually sustain such programs.  How does one establish sustainable sources of funding?  How does one establish and expand effective and efficient methods of resource distribution?  How does one defend against possible attacks from counter-revolutionary forces?  These are questions that force people to move beyond short-term acts of rebellion, and into the realm of longer-term questions of governance, and the optimal ways in which proletarian institutions ought to function, communicate, and evolve–and eventually, how they ought to replace the institutions of capitalism. 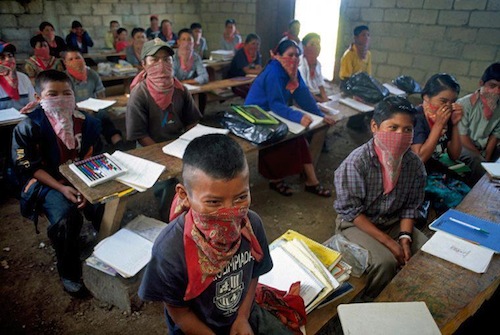 School controlled by the Zapatistas in Chiapas, Mexico.

The Panthers and Their Service Programs

The Black Panther Party, which arguably spearheaded the most potent revolutionary movement in US history, did not explode in popularity just because they shouted the right slogans in the streets and looked sexy as hell—the crux of their popularity was in their “Serve the People” programs, which established free breakfast programs for children, public health clinics, transportation services, and other such programs across the nation.  These were community-centered and locally controlled efforts that addressed the day-to-day needs of the masses.  As described in the book Black Against Empire: The History and Politics of the Black Panther Party:

The Black Panther Party’s community programs gave members meaningful daily activities, strengthened black community support, burnished Party credibility in the eyes of allies, and vividly exposed the inadequacy of the federal government’s concurrent War on Poverty.  Community programs concretely advanced the politics the Panthers stood for: they were feeding hungry children when the vastly wealthier and more powerful US government was allowing children to starve. (Bloom and Martin 2013: 13)

It is difficult to truly appreciate the scope of the Panthers’ community programs, or the role that these programs played in building a real alternative to capitalism.  The programs eventually penetrated pretty much every aspect of life, and their explosive growth is evidence to support the argument that addressing economic needs is a winning strategy–if not downright necessary for having a viable revolutionary movement.  In just a one year span, between August 1969 to August 1970, 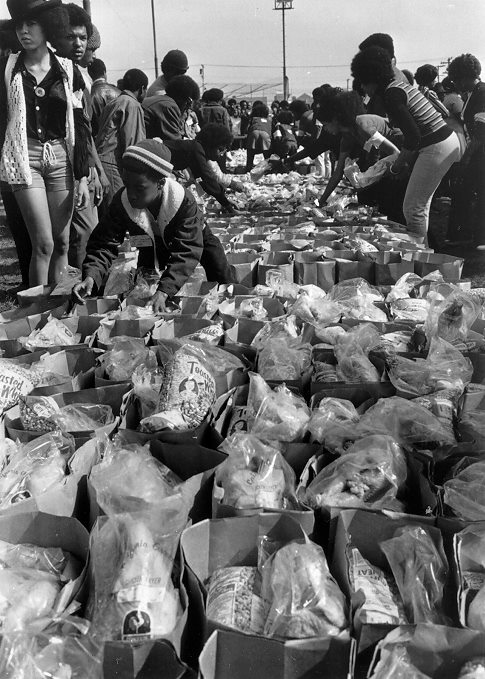 The effectiveness of the “Serve the People” approach was immediately evident.  As stated in the book Hillbilly Nationalists, Urban Race Rebels, and Black Power:  Community Organizing in Radical Times:

Notable among these “community-run solutions” were the network of health clinics that sprung up in Chicago, that saw health projects by different revolutionary groups—the Black Panther Party, the Young Lords, the Young Patriots Organization, and more—scale up to provide real, quality health service to people, while simultaneously building multiracial coalitions grounded in concrete projects (Sonnie and Tracy 2011: 81-82).

According to Black Against Empire, the community service programs fulfilled four critical and inter-linked functions for the consolidation and expansion of the Panthers’ revolutionary project (Bloom and Martin 2013: 196-97):

Functions one and three directly echo the comments made at the beginning of this essay, around the notion that effective revolutionary strategy has to 1) respond to direct and immediate material needs of the masses, and 2) develop radical political, economic, and social institutions in opposition to those of state and capital. 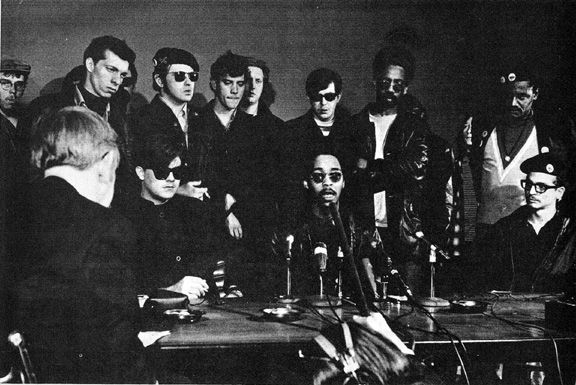 Press conference for the Black Panther Party and the Young Patriots Organization in Chicago, in the late ’60s.

The Biopolitical Core of Dual Power

In order to better understand the functionality and purpose of “Serve the People” programs, it is useful to turn to the theoretical frameworks of biopolitics and dual power: the former being a theoretical innovation of Foucault regarding the phenomena of state control over accessibility to the basic goods and services necessary for survival, and the latter being a framework for revolutionary organizing that appears in both Marxist-Leninist and anarchist theories about revolutionary strategy.

Addressing basic, day-to-day needs of people (food, clothing, health, etc.) is fundamentally a biopolitical engagement–one that intervenes and ruptures the control that capitalism typically has on people’s lives.  And the development of autonomous, proletarian institutions to deal with basic, critical questions of governance is fundamentally the development of dual power.  As hinted at earlier, these two types of engagements are not totally separate—in fact, they are arguably inherently inter-linked and mutually reinforcing.  Dealing with basic day-to-day questions of survival in the long-term requires dealing with larger questions of governance and institution-building; and trying to develop proper revolutionary proletarian institutions requires grappling with immediate local needs.

This relationship between the biopolitics and dual power is discussed in the third section of Alberto Toscano’s very excellent essay “Dual Power Revisited: From Civil War to Biopolitical Islam”, where he touches specifically on Hezbollah, the populist-theocratic militant group and political party that dominates much of southern Lebanon:

…much of Hezbollah’s hegemonic trajectory depends on addressing key questions of the government of life, adopting a ‘process of advocacy based on extensive fact-finding and teamed with grassroots support’.  In these ‘Islamist inquiries’, issues such as water problems are addressed through scientific-academic methods (i.e. Hezbollah’s Center for Developmental Studies) and by encouraging ‘the formation of residential and professional groups’ that can provide the territorial rooting for these biopolitical ventures.  In a situation of prolonged dual power where the stakes…are precisely based on averting civil war whilst gaining relative hegemony over a population sidelined by a fragmented, unequal and threadbare state…dual power is biopower, and daily garbage collection, large-scale health service delivery, and emergency water delivery are weapons of the first order. 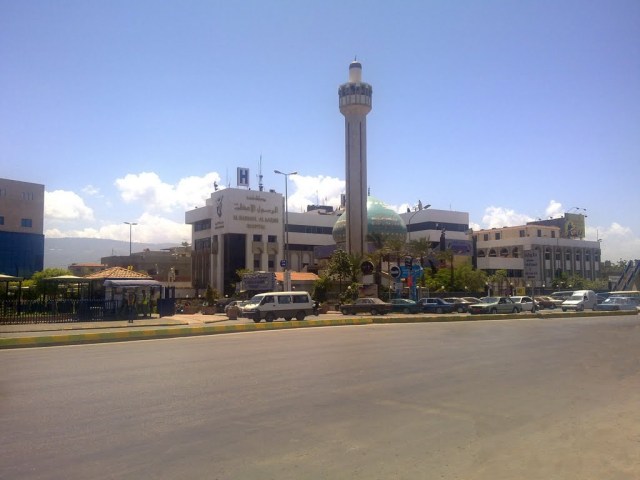 The al-Rasul al-Azam hospital/mosque complex, run by Hezbollah (funding courtesy of the Islamic Republic of Iran), and which is a major source of health care for people in southern Beirut.

Toscano ends the essay pondering whether the nature of Hezbollah’s emergence is part of a larger shift in the way dual power needs to be conceptualized, in light of contemporary capitalism:

Hezbollah’s important variant of “biopolitical Islam” hints at some of the contemporary conditions for the rethinking and exercise of dual power, where the separation of an autonomous political capacity and the generation of new types of power (whether revolutionary, conservative, or reactionary) cannot bypass the dimension of the production and reproduction of social life—in short, the question of survival.

I would say that yes, biopolitical engagement is critical to the development of dual power—but I would deny that this relationship is specifically “contemporary”.  After all, we have already seen that the Black Panther Party was a revolutionary organization that had, at its core, a biopolitical project—to the point where the Panther services were alternatively called “Survival Programs”—and whose strategy directly facilitated the development of dual power.  Thus, it is clear that the conditions that gave rise to an organization like Hezbollah gaining power over the abandoned, marginal masses of Lebanese slums are hardly new or unique–such conditions have long existed in the ghettos of the United States, and such conditions have been worsening over the past few decades with the escalation of neoliberal deindustrialization and the replacement of state-sponsored social programs with institutions of mass incarceration.

Regardless, Toscano’s commentary is very useful for analyzing precisely why the Black Panther Party’s community programs were so popular.  The central argument—that “the biopolitical element provides much of the substance of dual power”—is one that needs to be taken seriously by radicals and revolutionaries today.  Modern organizing in the United States seems to fixate on organizing rallies and marches, and perhaps short-term occupations when people are feeling especially bold; but generally speaking, the type of longer-term programs that address immediate needs, and which develop popular political and social and economic institutions, are disturbingly absent.  Groups that do engage in such projects are typically defined by a liberal ideology, content to work with capitalists and politicians, and within the limits of bourgeoisie democracy.

The tendency of putting excessive energy into short-term acts of theater that present demands to the state is especially surprising when groups that are supposedly Marxist, socialist, or communist center them as the optimal area of engagement.  After all, the core argument of the Marxist perspective is that it is the material composition of society that determines (or at least, heavily influences) its political, cultural, and social characteristics–and as such, interventions at the material and economic level are what is necessary to induce revolutionary change at the political and social levels.  In this framework, street demonstrations are a show of power, but do not themselves develop power–and thus, should not become the primary method of action.

If we are to take the question of revolutionary struggle seriously, then we have to take the questions of effective service, institution-building, and bottom-up economic development seriously.  Like the the Black Panther Party and their contemporaries, let us begin moving away from making demands to state and capital, and develop our own institutions and our own solutions–and in the process, lay the groundwork for smashing capitalism altogether. 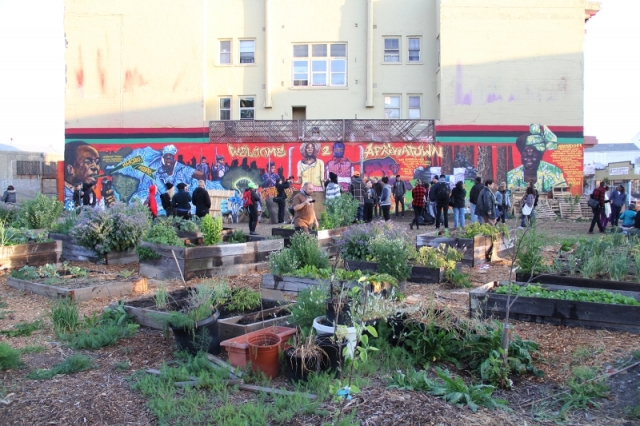 Joshua Bloom and Waldo E. Martin, Jr.  “Black Against Empire: The History and Politics of the Black Panther Party”.  University of California Press.  2013.

10 Responses to Biopolitics, Dual Power, and the Revolutionary Characteristics of “Serve the People” Programs